The specialist in classic Suzukis

For almost all models from different construction years.

Look here for our current range of motorcycles.

On this website you will find the construction drawings of your motorcycle with the correct Suzuki part numbers. Enter the numbers you want on our website and you will see our price and availability.

Is your product not listed?

If you do not find what you are looking for, just send an email with the numbers or your question. 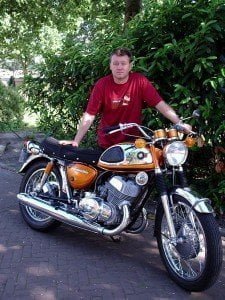 Hello, I’m Marcel Vlaandere, owner of Classic Suzuki Parts NL. My business grew out of my fondness for these Suzuki two-strokes years ago. From the day I turned eighteen (7-1-1982) I rode and chose this series over the rest of the motorcycle range. After a GT 250, T500 and GT 750 I tried other two-wheelers for a while, but, like many with me, after years I returned to my old love: the GT 750.

Hopefully we will see and speak to each other in person one day.

In 1994 I returned to the Frisian Bolsward because of other work. An old childhood friend there had a shed full of GT gear. He wanted to pass that stock on to me, as his interest had now turned to a completely different area of motorcycles. The collection was so large that I had to advertise it after I first took out a private stock.

As a result, I got enthusiasts from all over the country. I was repeatedly asked why there was no T and GT club in the Netherlands. According to many, given my extensive parts stock and my contacts, I was the right person to start such a club.

In 1997 I organized the first meeting as a trial. I had long been satisfied with an attendance of 50 people; it became 110. As a result of this success, I founded the T and GT Fancier Group, which turned into a real club with about 250 members in October 1999 and we are still growing!

In April 1999 I took the big step myself and officially registered as a motorcycle dealer. Make your job your hobby (because that’s how I still feel) who doesn’t want that? I have no illusions about the size and duration of the T and GT trade. I still get excited about beautiful engines and parts and if I can work in that for a number of years, then I go for it.

So, I hope you now have a bit of an idea of me and the origin of my company: Classic Suzuki Parts NL.